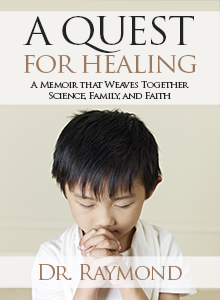 Dr. Raymond Park is one of the world’s leading skin care scientists, credited with developing a formula that cured both his infant and four year old sons of acute atopic dermatitis, a formula that would go on to become the leading brand for sensitive skin in Korea and then the world. The path to his discovery was a lifetime in the making and there were dark moments when he might have turned away, never to offer his unique vision of skin care to the world.

With heart and candor Dr. Park shares memories about his life, fraught with the pressures of growing up in one of the most academically pressured and competitive societies in the world. Constant was his inner struggle to define himself on his own terms in the face of intense parental pressure about education, a troubled relationship with his father, men and women, and then, one of the most precious relationships of all: as a father with his sons, especially his middle son, who provokes the unforeseen depths of his own cultural conditioning, challenging him to the most difficult struggle of his life:: how to be the parent he wanted to be deep in his heart.

A Quest for Healing is at once intimate portrait of life in South Korea, of the struggle to gain admission into the nation’s most coveted university, Seoul National at a time when the horrors of the Gwangju massacre and the government’s betrayal of its own people were exposed, igniting the new student movement. When his closest friends were heading deeper into the struggle for social change, Dr. Park wrestled with his own conscience and the voice inside that was leading him away from the others, to his own way. The way that would eventually lead him to the crossing of the great mysteries of spirit with his knowledge of science, giving voice to his mission for skin care. It is the story of the forces, inner and outer, that shape a person’s destiny, someone who is engaged in the classic struggle to find what is truest in the human heart.

Dr. Raymond Beong Deog Park earned his PhD in Chemical Engineering from Seoul National University. He is the first skin scientist to develop a viable bio-identical non-prescription formula to heal and protect the skin barrier, helping thousands of children and adults to heal from atopic dermatitis and other skin ailments. The proud father of three wonderful sons, Dr. Park has made it his lifelong mission to continue expanding and perfecting his award winning formula, a top selling line in Korea for over ten years for sensitive skin. He now resides in the States with his family. To learn more about Atopalm and Medikos, please visit his websites at www.atopalm.com and www.medikos.com.

On my first birthday, I chose the notebook and pencil. I was too young to remember it but my parents told me a few years later that I had, probably in one of the many moments they spent telling me about the big shiny university in Seoul I would get into when I grew up, the best in the nation.

Decades later, to my wife’s and my delight, my first son, Jun-Hyeong and my third son, Chae, both chose the notebook and pencil.

Our second son, Ji-Hyeong, however, took one look at all the items and his little hand came out, grabbed the rice cake and in seconds, he’d devoured it happily.

Suk Young and I stared at our son. We were so sure he’d choose the notebook and pencil that his hasty choice immediately made our hopes sink. Our son would be strong and lucky, perhaps. But he wouldn’t be a scholar.

“Ji-Hyeong,” I said, pushing the remaining items toward him. “Choose again.” I pointed to each, my heart beat rising a bit.

After a moment, Ji-Hyeong’s round face turned to the money. He picked up the bill, a note equivalent to ten dollars, and held it.

I exhaled at his second wrong choice. Ji-Hyeong didn’t need to be rich. One of the reasons I had barely seen him this entire year since his birth except on weekends was because I worked night and day on the new formula of skin cream I was developing. A breakthrough for mothers with children who suffered skin problems and didn’t want to use prescription medicine with possible side effects. Even before I’d finished my doctorate, I’d distinguished myself as a research scientist in my area of expertise. If all went as planned, my new venture would take off with wild success. As long as I managed everything properly, Ji and his brothers’ futures were assured. They would have the freedom to pursue studies and distinguish themselves as the wise scholars they were meant to be.

In a last desperate attempt to assure a good prophecy, I pushed the notebook and pencil even closer to Ji, close enough that he would barely need to reach out for it. “Go on, Ji-Hyeong,” I said. “Take the notebook. That’s the one you really want.” I nudged the notebook even closer until it touched his little fingers.

Finally Ji curled his grip around the notebook and held it.

I breathed a sigh of relief. In time he would understand how much better it was to be a wise scholar.

Growing up, I’d been indifferent to tradition, rebellious against it to a large degree in my struggle to define myself on my own terms. However, now as a young father with children of his own, I knew the importance learning and study had in my own life, the opportunities it had given me in moments when turning away from it could have robbed me of any promising future. Like my father and his father before him who’d pushed his sons to be educated and reach for the absolute highest in life possible, I was now about to do the same.
I didn’t see in that moment the other reason for my anxiety. Ji, being the only one who’d chosen something other than the notebook and pencil, had already shown me he was different. Ji would be the boy of the three I didn’t understand, who challenged me as a father and pushed me up against the boundaries of what I’d learned, the models I’d had and would desperately need to go beyond.

Nor did I see my insistence that Ji pick up the notebook and pencil as any violation of a promise I’d made to myself in childhood, a promise that I would break many times in a number of years, not intentionally of course, but which would be a source of unhappiness and, if I wasn’t careful, the possibly permanent loss of a good, meaningful father-son relationship, such as had happened to me and my father.

The promise I made one night, shivering in my bed after a great fright, was that I would never be like my father, not as a person, not as a father.

It started with something as innocent as a piece of paper…